Whether you’re a player, coach, or fan of baseball, you’ve probably heard the term “squishing the bug.” You will also be aware that it is a subject that divides everyone in the industry. Weight dynamics on the back foot through the swing can impact all sorts of important metrics: angle, strength, body mechanics — you name it.

So is there a single “correct” answer to the age-old debate?

Here at The Hitting Vault, founder Coach Matt Lisle welcomed one of the newest members of the team, Coach Tom Eller, to discuss one of baseball’s most controversial topics.

Originally from Rising Sun, MD, Coach Eller has had a remarkable career at Harford Community College. He took over coaching a team that hadn’t made playoffs in the previous decade, and got them there in his first season. During his tenure, the Fighting Owls recorded their most successful campaigns in program history: winning five regional championships and making a NJCAA World Series appearance. After Harford, Eller was recruited by the Baltimore Orioles as a Minor League hitting coach.

In this video, Coach Eller offers insight on “squishing the bug” — what it means, why it’s popular, and whether it’s ultimately good swing technique.

What is “squishing the bug”?

“Squishing the bug,” also known as “squashing the bug” in baseball and softball, is a technique taught by hitting coaches at all levels, from Little League to MLB. During the swing, players are taught to rotate, or pivot, on the back foot, spinning in one spot and keeping their weight on the back leg.

The motion is reminiscent of… you guessed it: squishing a bug underneath the toe of your shoe.

As you can see in the video, Coach Eller demonstrates what happens to the hitter’s body as he tries this technique. The swing usually starts with the hands rather than the hips. At some point, after contact is made, the hitter rotates the back foot, as though crushing an imaginary insect, instead of finishing the hip turn.

When is this move taught?

“Squishing the bug” is most often taught by coaches to young ball players as they are first learning to hit. At this level, a coach may believe that “squish the bug” is a good way of teaching a beginner player how to rotate their hips during a swing. The description of the motion is clear to younger minds, and is a fun verbal cue that works for novice players.

However, in response to this cue, a young hitter may get into the habit of keeping most of their weight on their back leg. When this happens, they are unable to complete a full hip turn, resulting in a gradual loss of power in their swing as they mature.

What is the opposite of “squishing the bug”?

Coach Eller suggests cueing young players to “jump over the bug” as an alternate visual. As the hitter begins the swing, there is forward momentum of the body, and at the point of contact the hitter’s weight is entirely transferred to the front leg.

“One of my cues for this is to think about rotating your belly button towards the pitcher, and ripping your back foot,” he offers.

As the hips pop and begin to rotate toward the pitcher, the upper body moves very little. A separation occurs between the top half and the bottom half of the body, and the hitter’s back foot ends nearly upright. It is from this body position that the player will achieve the greatest transfer of power to the ball.

Is “squishing the bug” an efficient move?

Some argue that “squishing the bug” can have an increasing effect on bat speed at impact. For Coach Eller, the move is not effective and causes more problems that it solves. “You’re just spinning in place, working towards your pull side dugout,” he asserts. “Your barrel’s going in and out of the zone.”

To hit the ball with full speed and power, the energy built up by the legs working against the ground must be transferred to the player’s hips. When the hitter has been trained to “squish the bug,” they turn the rear ankle, which turns the back knee, which then turns the hips. This breaks the chain of energy. Spinning the back foot in place sparks a negative ripple effect throughout the swing, and causes both the body and barrel to be too rotational. Energy, therefore, works around the ball instead of through the ball, and a lot of batting power is unnecessarily lost.

Do players at the professional level “squish the bug”?

The introduction of television and instant replay in baseball has meant that every motion of every player can be slowed down and scrutinized. This has been a boon to the coaching industry, as different professional players’ body mechanics and techniques can be analyzed and adopted.

It has also revealed, unsurprisingly, that not all pro players hit the same. Some famous hitters, such as Los Angeles Angels Center Fielder Mike Trout, keep some of their body weight on the back foot throughout their swing. But is this universal?

According to the coaches, many studies have been conducted at the Major League level, and concluded that 96% of elite hitters do not “squish the bug,” or pull weight onto their back foot at contact. This vast majority supports the coaches’ assertions above that “squish the bug” is not the ideal cue to teach to young players who wish to keep developing their swing power.

Of course, this also means that 4% of professional baseball players are able to use “squish the bug” and have success. But the coaches believe this is mainly due to their size and power. “Guys who are 6’7”, 6’8” and weigh 300 lbs?” muses Eller. “They can “squish the bug” all day long and get away with it.”

How to fix the mistake

Bad habits are difficult to unlearn, especially for younger players who have been given unwise cues for their hitting mechanics. But with consistent training and dedication, any player can adjust their hitting technique and acquire a stronger swing.

If you’re trying to correct your hitting footwork, Coach Eller suggests putting a small piece of tape on the ground in front of your back foot and visualizing getting over the top of the tape. This will be easier if you think about transferring your weight to your front foot in a linear forward momentum, and rotating your belly button towards the pitcher.

If you are already a member of The Hitting Vault, this will sound very familiar. Coach Lisle demonstrates this exact technique in the “Paintstick Drill.” For this drill, he suggests using a paintstick, pencil or ruler in front of your back foot as a visual aid to help you in practice. When swinging, the back foot should pull forward over the paintstick, thus reinforcing the weight transfer.

Although “squishing the bug” remains popular — especially with older coaches of young or beginner players — our coaches advise that it is not an efficient move as it wastes power and energy. Fortunately, with a few simple drills and visuals, you can unlearn bad habits and realize your greatest batting power.

To watch the full conversation between Coach Matt Lisle and Tom Eller — our latest addition to The Hitting Vault team — check out the video above, if you haven’t already. We’re excited to have Coach Eller on board, and to share all of his invaluable knowledge and experience with our members.

For more help in building a lethal swing, consider signing up for The Hitting Vault’s membership. Our dream is to help every baseball and softball hitter unlock their true potential. With insider advice from elite coaches — and 200+ training videos — you’ll develop the critical foundations you’ve been missing, and uncover your most powerful swing. 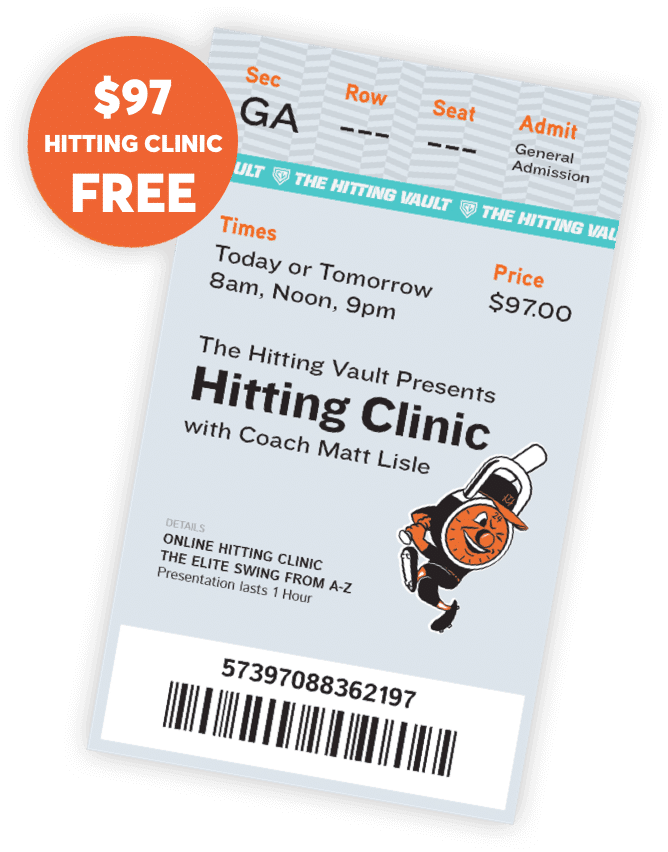 Parents: Want to Find the #1 Issue in Your Athletes Swing, Robbing Their Power?
Take the 59 second "Unlock Your Power" Analysis Tool™, and find out exactly how your athlete can add 30-50 feet to their line drives (instead of ground outs).
General