Ready to Give the Joy and Confidence That Comes from Hitting the Snot Out of the Ball? Yes! Show Me How
The Hitting Vault » Hitting Tips » Swing Analysis » Cody Bellinger Swing Analysis

It is no doubt that Los Angeles Dodgers outfielder Cody Bellinger is putting up crazy numbers a third of the way through the 2019 campaign. What makes Bellinger so good?

Ever since he busted onto the scene two years ago the kid has been able to hit the long ball. Now he can hit home runs and hit for average, a pretty dangerous weapon that is helping make the Dodgers a World Series contender.

Check out The Hitting Vault Swing Analysis of Cody Bellinger in the video below:

Bellinger begins pretty upright with the bat parallel to the ground over his back shoulder. As we have discussed in previous Swing Analysis videos of Mookie Betts, Alyssa DiCarlo, and Hope Brandner, as long as you have elite body control and understand how to get to a good load and launch position, you can start with whatever is most comfortable.

Bellinger is no different, he will find himself in rhythm with the pitcher and be able to get to a good launch position. Typically though what is easiest for youth baseball players, is to start more neutral with some bend in the knees because it will be less movement when they stride forward. 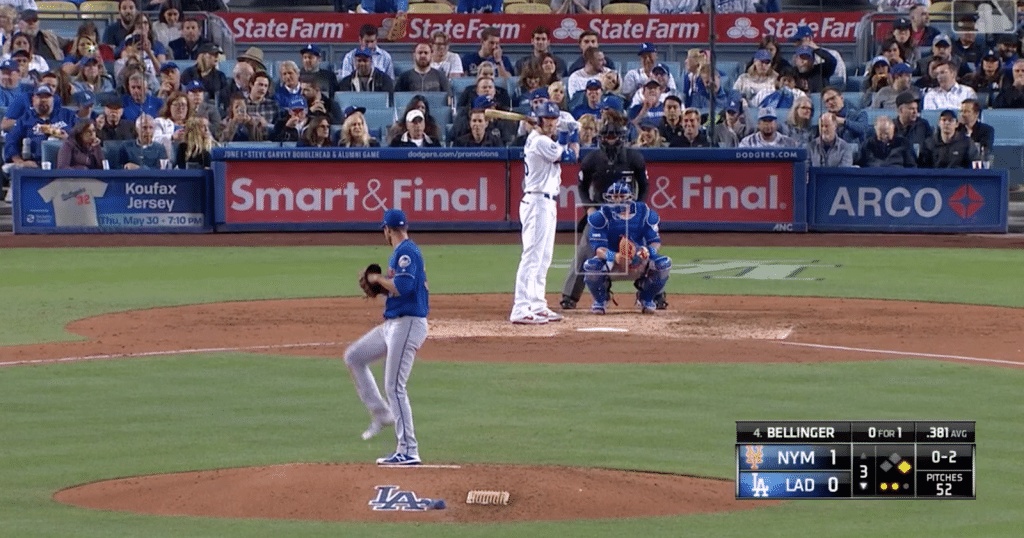 For beginning in such an upright stance, Bellinger has a relatively simple load and stride. In the picture below, he is in the load phase of his swing. A good swing should not be rushed in the load, but instead should be slow to fast.

You can see in the front view his numbers and the last name are facing the pitcher, and his front foot is about to land. Bellinger is using his body like a coil, he is internally turning in to them uncoil out, creating a massive amount of power. 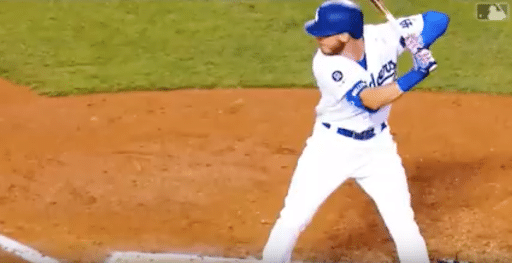 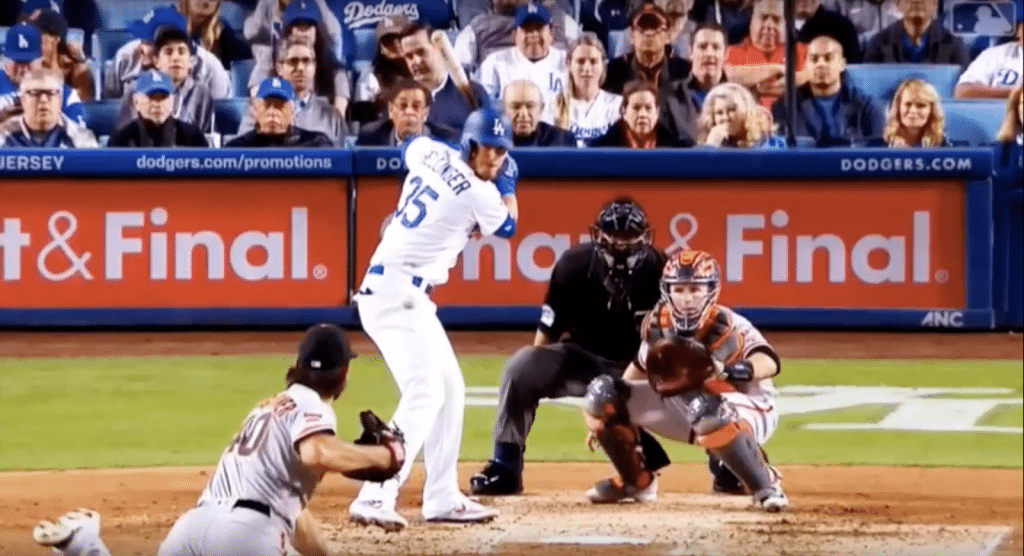 Bellinger’s head is pretty central to his body and his front leg has a little bend in it, allowing him to adjust to necessary off speed pitches. We call this front leg adjustability, and it is very important to the rest of the swing. See what Coach Matt Lisle had to say about it here. 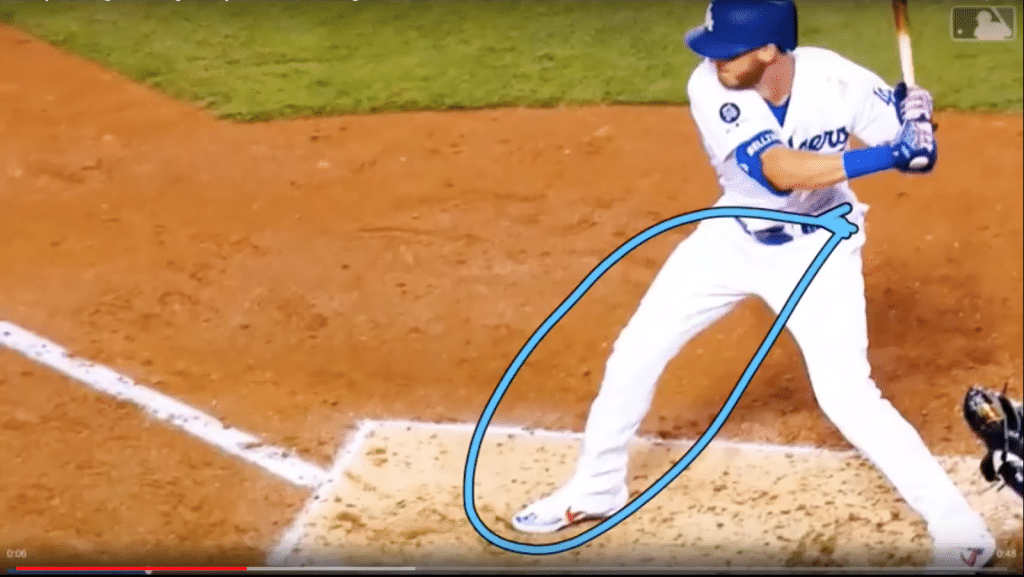 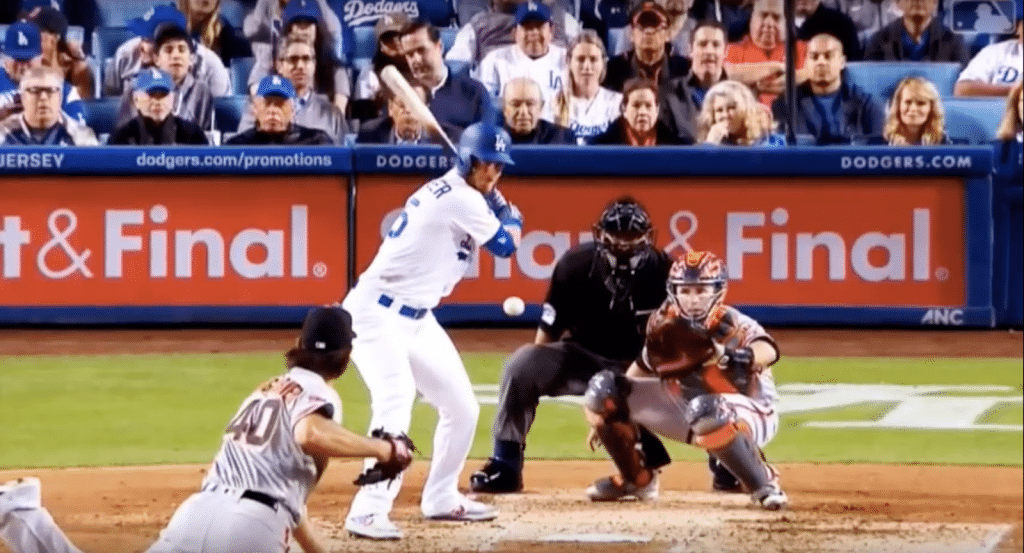 This is Bellinger’s money maker. In all three pictures you can see his hips are starting to fly open, and his shoulders are staying back. This movement creates a coil like tension, where he can generate power to come through the point of contact.

Cody’s front heel is working down on the ground and his bat is working more vertical, remember how in his stance his bat was parallel to the ground? Now it is working up and getting ready to get on plane. His belt buckle is starting to leak towards the pitcher, meaning his hips are opening up and starting to unleash. He has good hip hinge as well, which is impressive given the way he begins his swing

Bellinger has a picture perfect launch position, and he has the ability to take pitches all over the yard for power but especially to right. Here are all of his home runs courtesy of Baseball Savant. 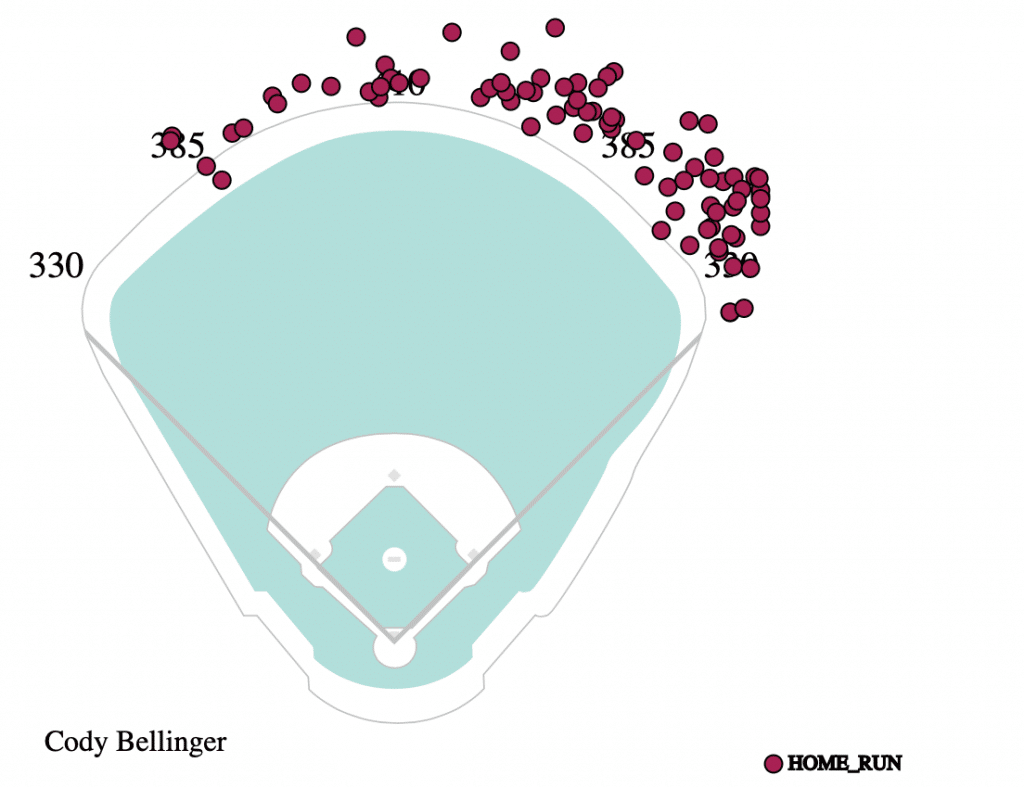 In addition to movements in his lower and upper half of his body, Cody Bellinger gets on plane early and generates great bat speed. His front shoulder works up and his back shoulder works down, his hips are working hard open and his belt buckles working forward to the pitcher.

You can see where he starts to get on plane as well, it is early. He gets bat speed through the zone starting back just as he starts to enter the zone. The arrows in the second picture illustrate just how long Bellinger is on plane through the zone. He is in a good palm up / palm down position, his back foot is becoming weightless as his weight shifts forward and is blocked out by his front leg. 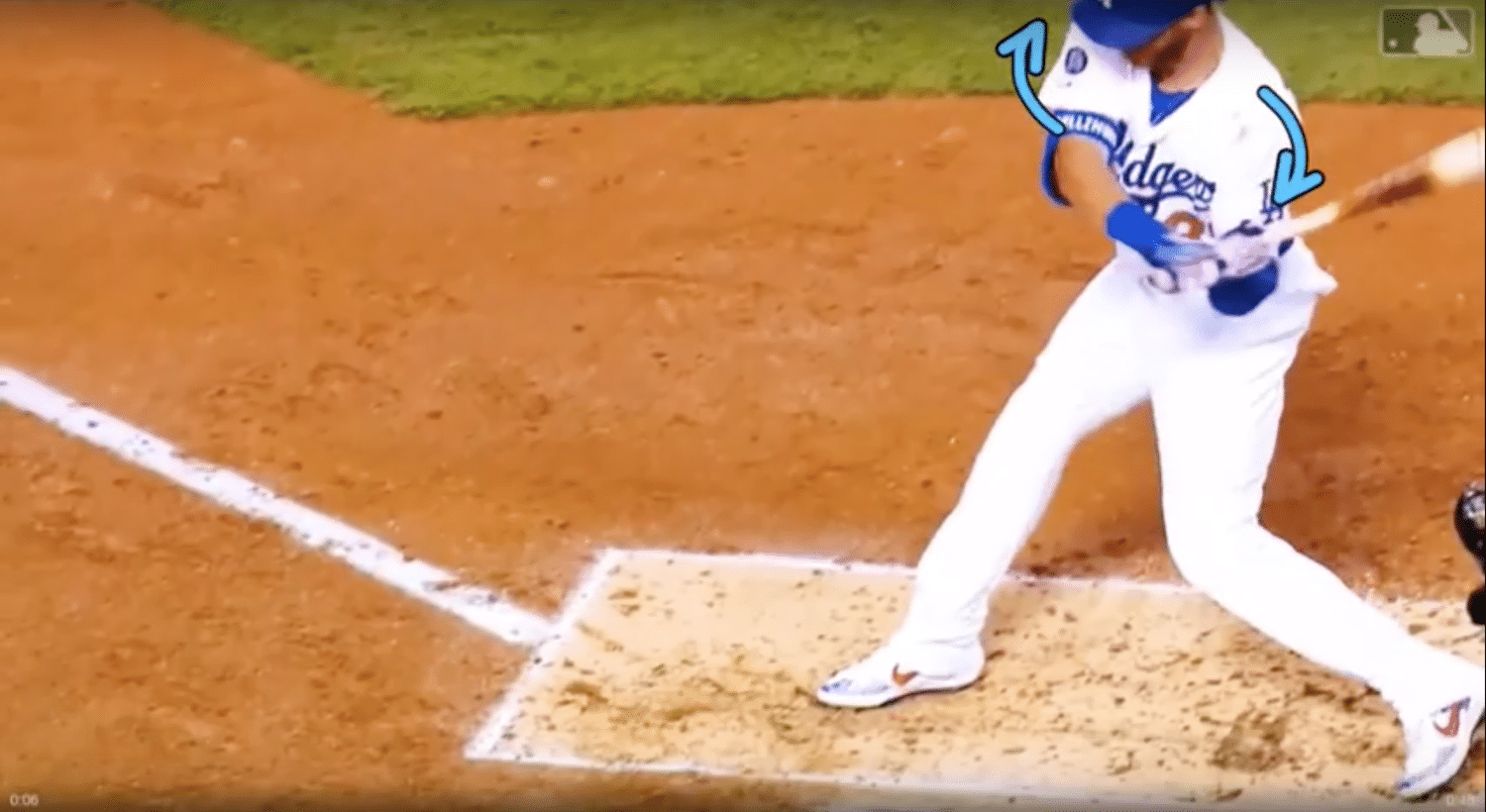 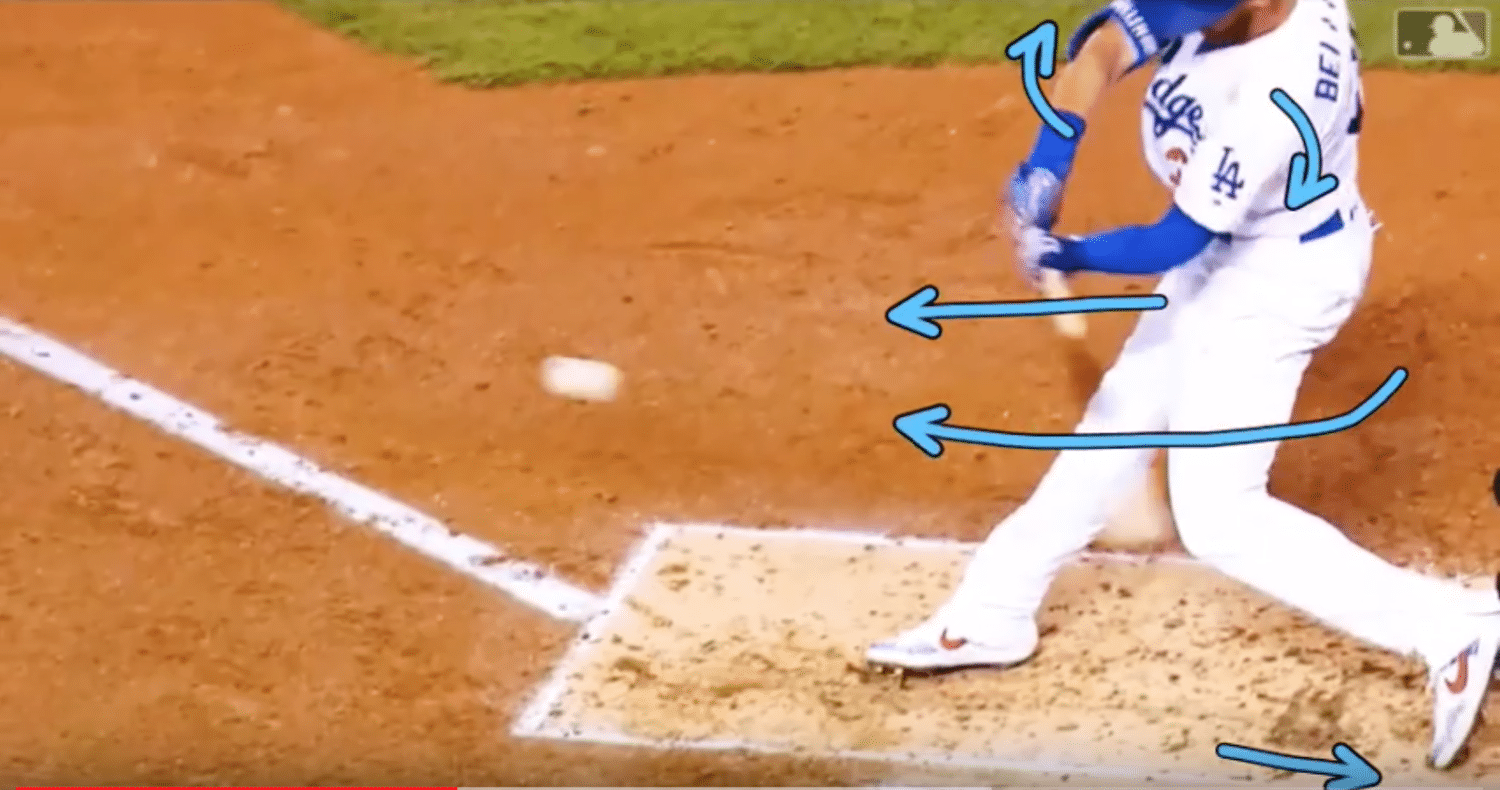 Extension and Finishing the Swing

Cody Bellinger extends very well. Extension is a byproduct of the rest of the swing, and this swing creates a ton of power through the zone. Bellinger has good posture at the point of contact and especially after it.

As we can see in both pictures, his back shoulder has totally worked through the ball, his back foot is almost weightless, and his front leg has blocked the momentum of the swing going forward. 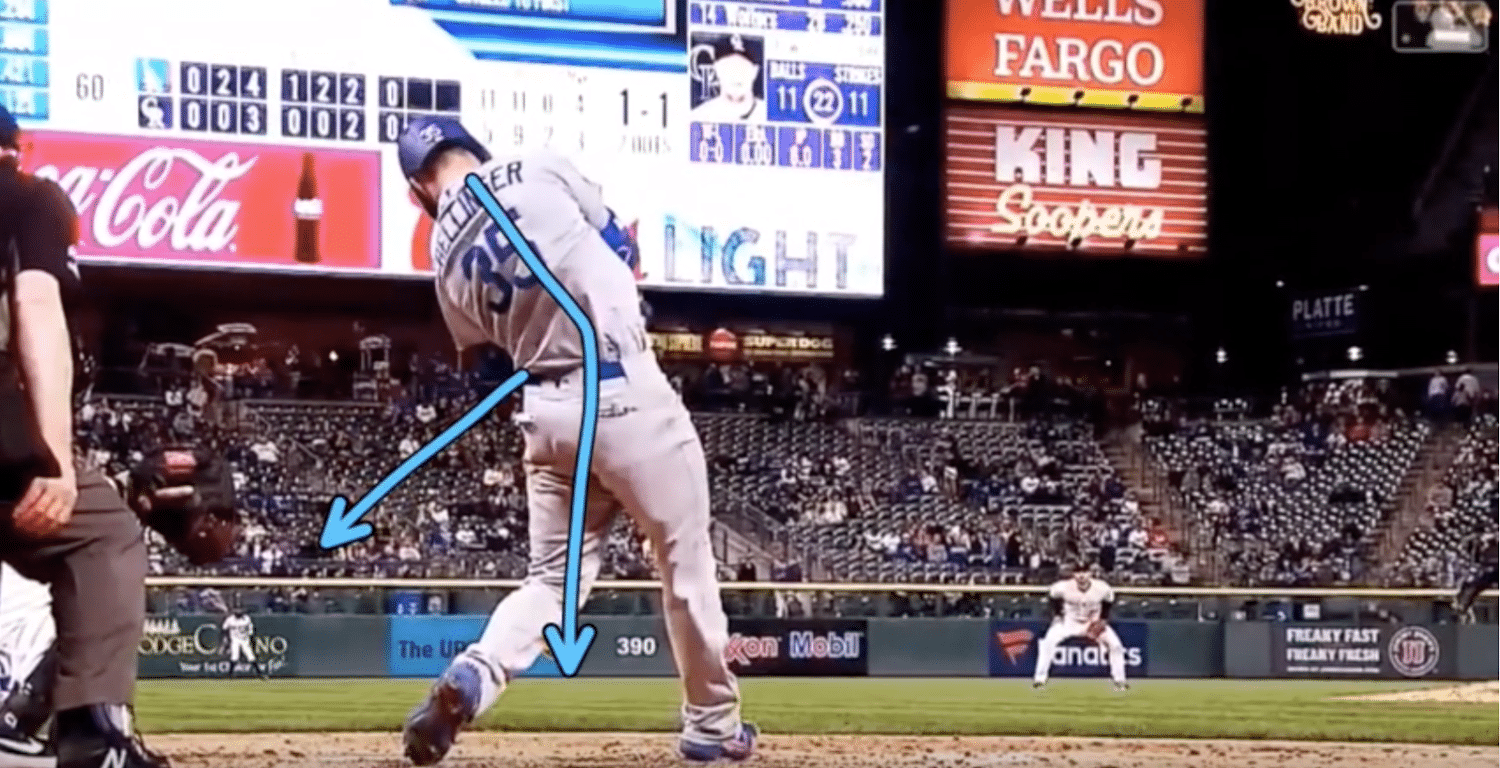 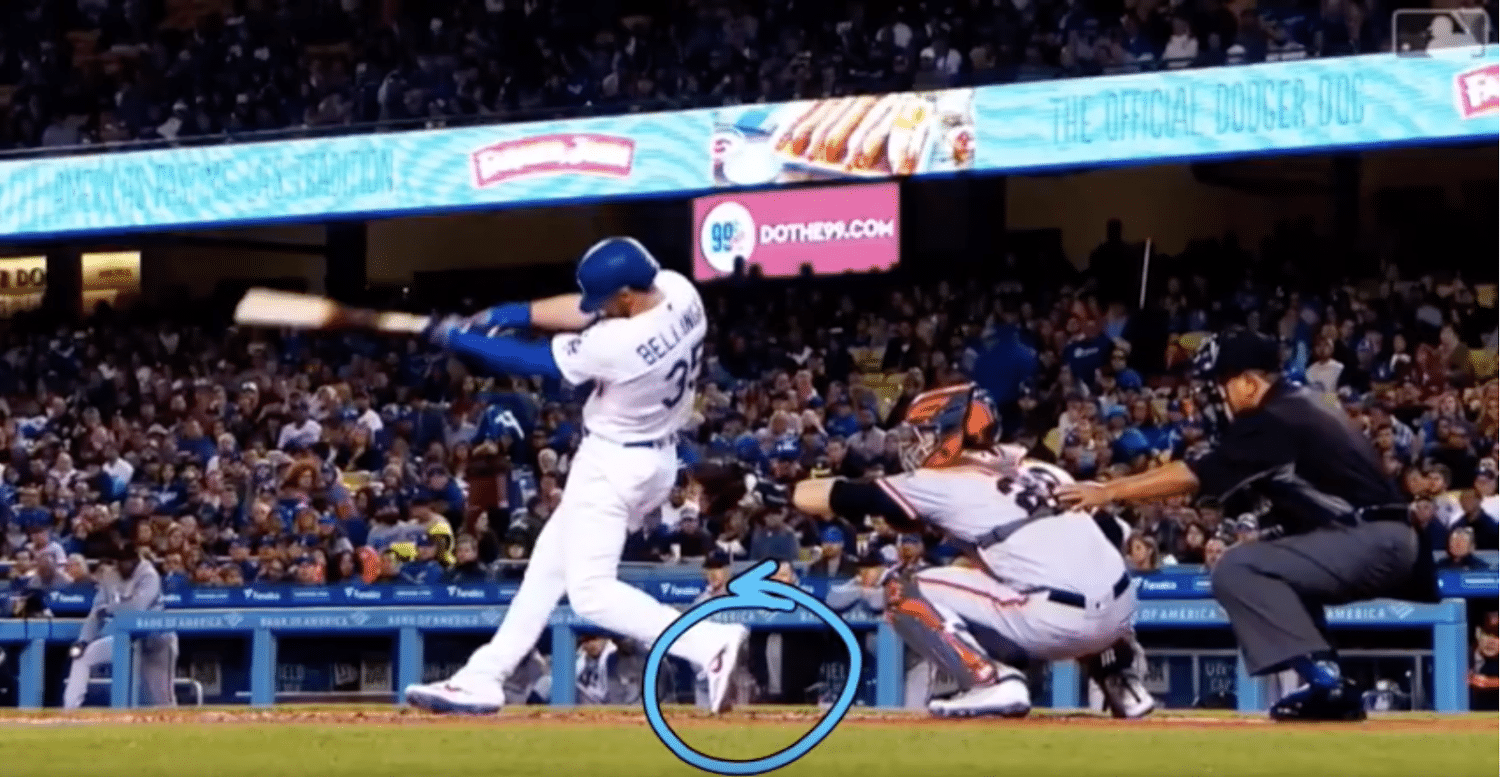 At The Hitting Vault, when we teach hitters how to hit for power, both in baseball and in softball, one of the most important things we emphasize is good body movements.

Bellinger’s full turn at the end of his swing can be overlooked but it is such an integral part of  his ability to hit for power. The back of his jersey is facing the camera on the other side of the field and we can read his last name with ease. 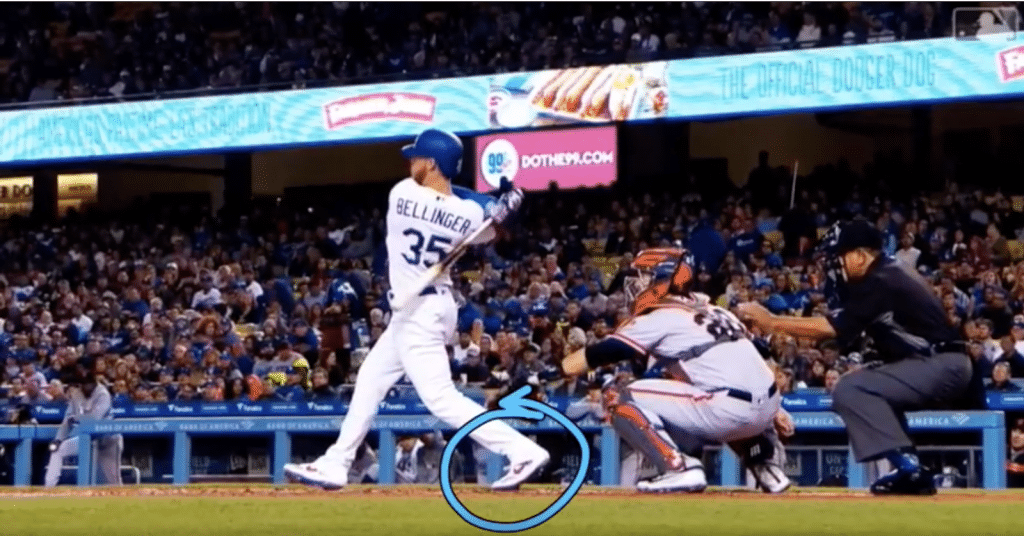 Cody Bellinger’s 2019 campaign was one for the books, and it is likely to continue through the 2021 season. His defense has been spectacular, but nothing is more impressive than his bat and mastery of simple movements. To master these movements and to watch over 100 videos on drills designed for you to unlock your power by hitting guru Matt Lisle, get yourself a membership to The Hitting Vault today.