Aaron Judge has done it! After a 4 game drought, he sent number 62 soaring over the left field wall at Globe Life field in Arlington Texas. He smashed a hanging slider off the Ranger’s Jesus Tinoco in the top of the 1st to give the Yankees and early 1-0 lead. He hit it 100.2 […]

Aaron Judge has tied the American League single-season Homerun record! He shares the record with Roger Maris who’s been the loan record holder since 1961. Babe Ruth is now solely in second with 60. One more and Judge will own that title himself. 61 years since 61. Aaron Judge has written his name alongside Roger […]

Albert Pujols sent Homerun number 699 off the LA Dodger’s Andrew Heaney over the left field wall at Dodger Stadium Friday night. An inning later in the top of the 4th off Phil Bickford he hit number 700! He smashed it 389 feet, with an exit velocity of 99.8, and a 33 degree launch angle. […]

The Judge has done it! He now is tied with the Sultan of Swat in most AL Homeruns in a single season with 60! With 16 games remaining, this puts him on pace to hit a total of 66. The only one ahead of him at this point is Roger Maris, who has held the […]

If you weren’t rooting for Albert Pujols before, you have to be now! At 42, The Machine keeps making history. Saturday he tied Alex Rodriguez who was 4th on the Career Homerun list, with his game-tying laser down the left field line against the Pirates. As of Sunday though he stands alone in 4th place. […] 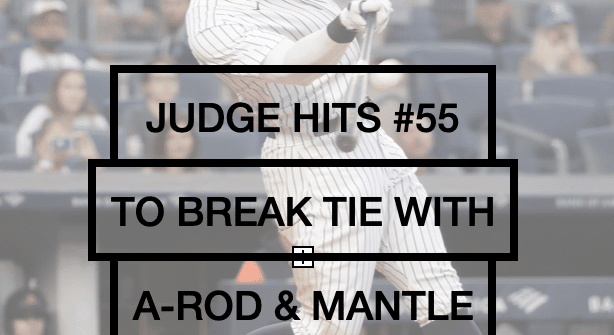 With his 55th homerun hit this season off in the 4th inning against the Twins, Judge broke the tie with Alex Rodriguez (set in 2007) and Mickey Mantle (set in 1961, switch hitter) for most Homeruns hit in a single season by a right-handed hitter! Babe Ruth (60) and Roger Maris (61) are the only […]

Former University of Arizona star, Dejah Mulipola came out on top after a tight points race going into the final game of the 2022 Athletes Unlimited Season. Since AU’s inauguration in 2022, Mulipola is just the first position player to win. She finished with 1,782 total points (the point system is explained below), .432 with […]

There’s been lots of discussion about the extra inning foul/fair ball call in Thursday’s Regional game between Oregon and Washington. It was the bottom of the 7th, tie ball game, Washington had a runner at first. A ground ball was hit down third base line. The home plate umpire called it fair, the field umpire […]

On Tuesday Vin Scully, the voice of Dodger baseball for 67 years, passed away in his LA home. He started out in 1950 at age 22 when the Dodgers were in Brooklyn and followed them to LA in 1958. Vin Scully’s Greatest Calls Vincent Edward Scully will go down as arguably the greatest play-by-play broadcaster […]