Ready to Give the Joy and Confidence That Comes from Hitting the Snot Out of the Ball? Yes! Show Me How
The Hitting Vault » Hitting Tips » Swing Analysis » Hope Brandner Swing Analysis

The University of Minnesota Gophers punched their ticket to Oklahoma City for the Women’s College World Series largely in part to Hope Brandner and Amber Fiser. Fiser led the Gophers on the mound, while Hope Brandner provided the offense. The sophomore transfer from Oregon State hit .354 with 19 homers at the completion of her season.

The Hitting Vault coach Alexa Peterson broke down her swing in the video above, check it out! 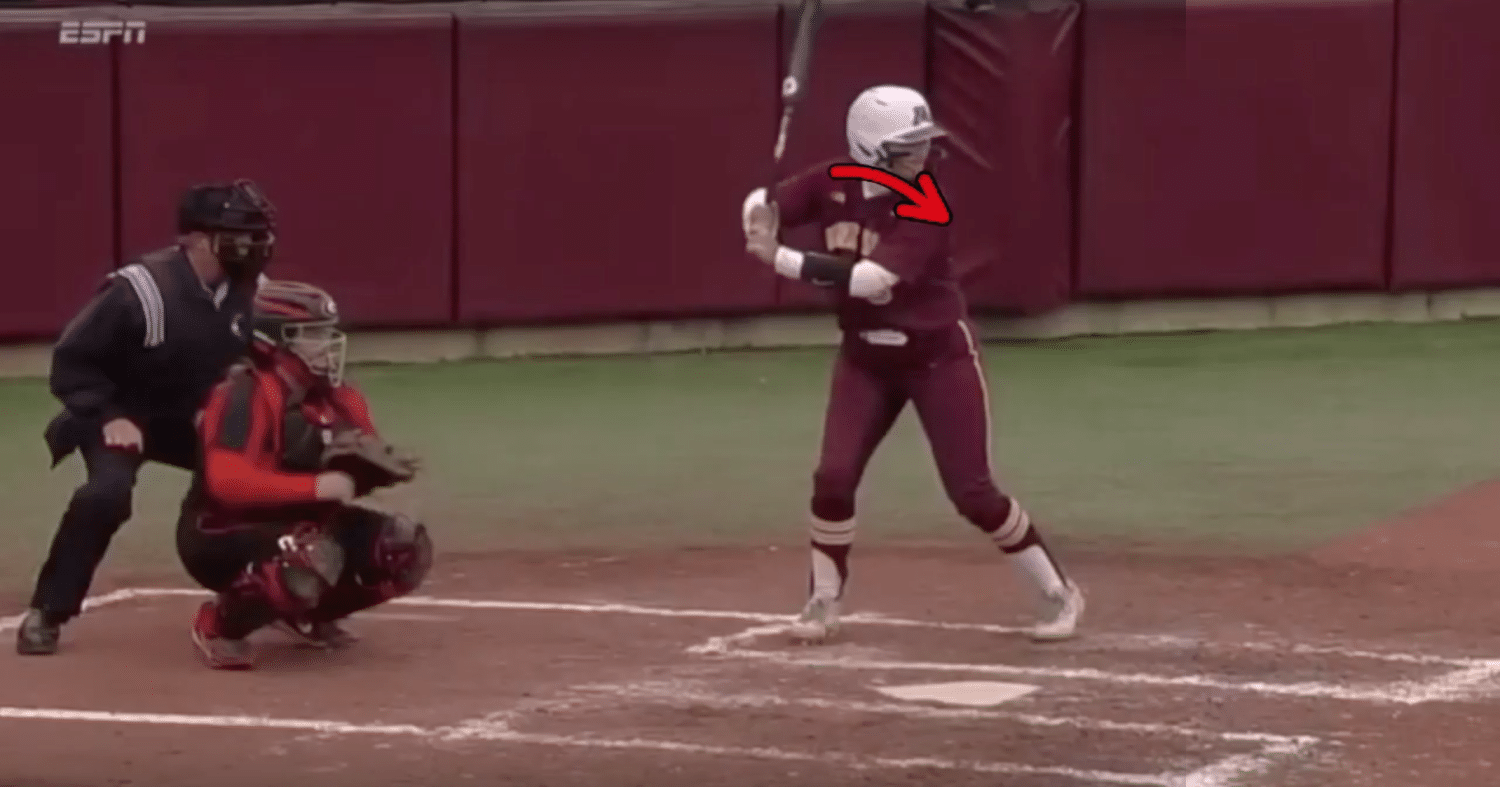 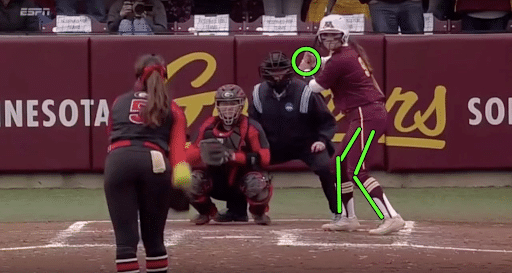 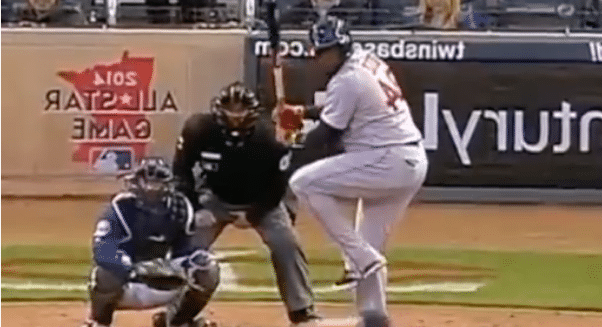 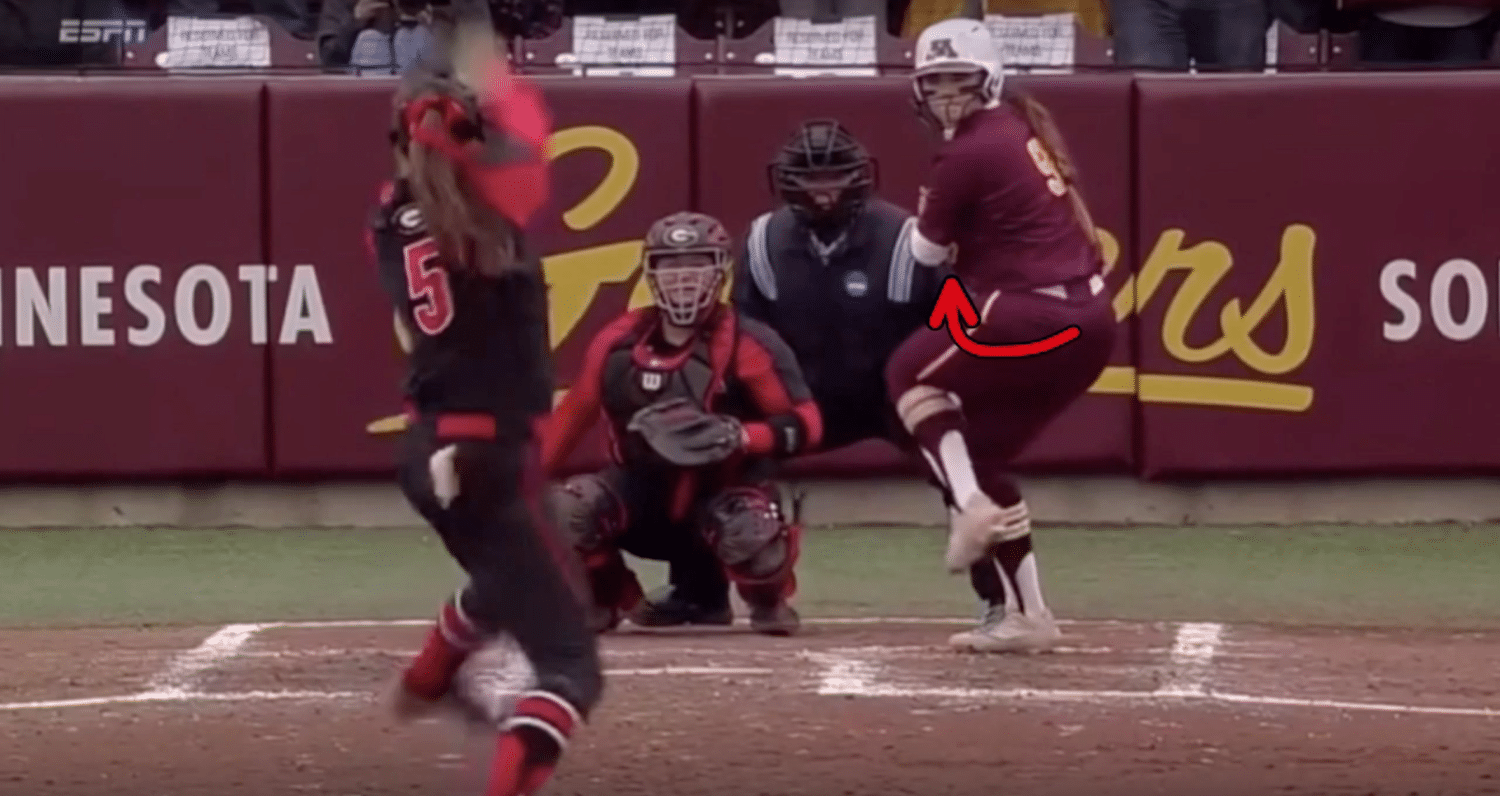 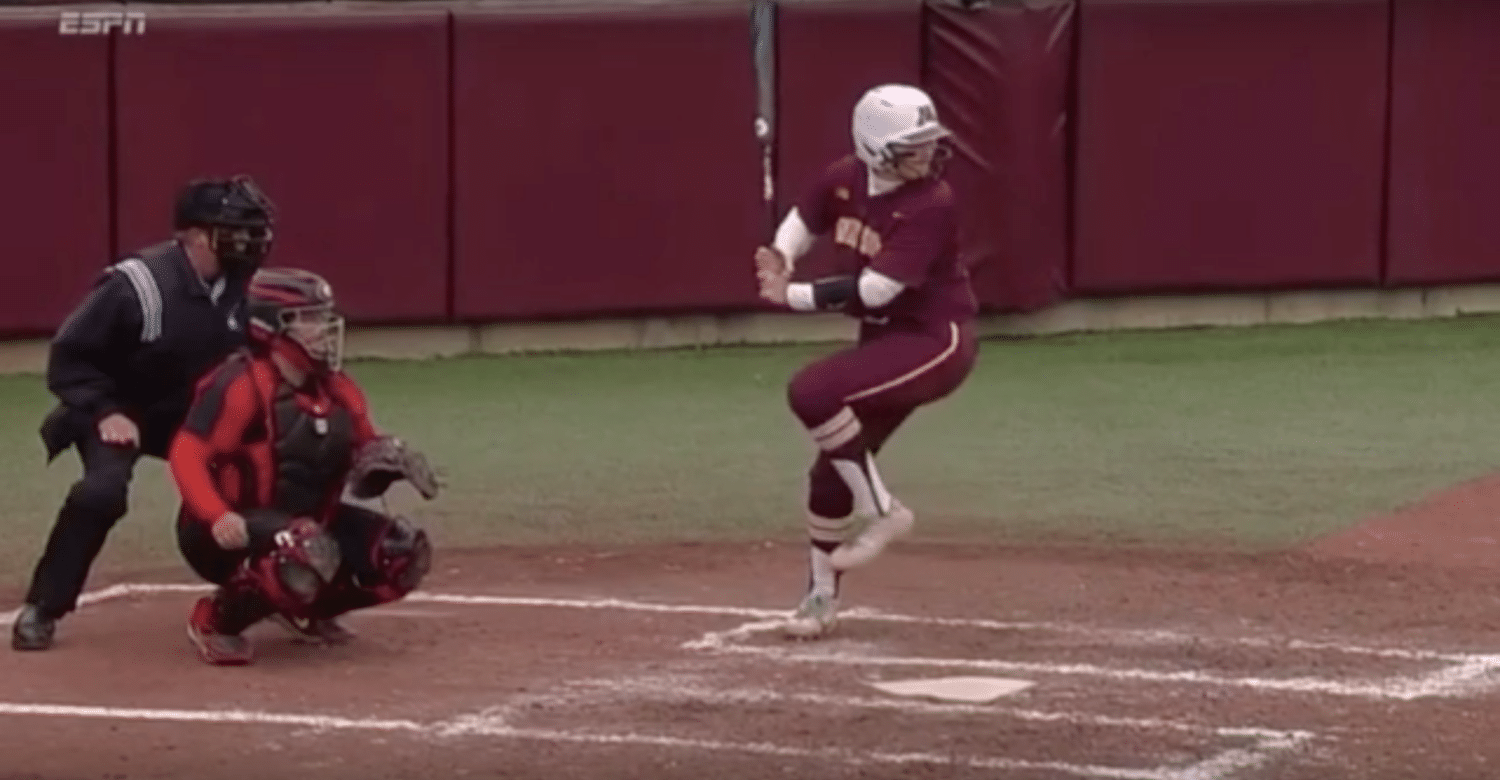 Hope Brandner has incredible body control. As she goes into her load, she has a higher leg kick and her hands drop down. She probably did not hit like this when she was playing youth softball, but with coaching, practice reps, and having good body control and game swings, she was able to implement a higher leg kick which does aid in creating power if done so correctly.

The sophomore infielder has a load and stride similar to that of the legendary designated hitter David Ortiz. Above is a side by side of her and Ortiz in 2014, Ortiz is a natural lefty, so we flipped him to show the similarities. Brandner has great internal hip rotation in her load. In both the front and side views of her swing, she is trying to show her back pocket to the pitcher creating the energy she is going to release later in the swing. She is using her lower half like a coil, so she is rotating back into it to build up tension and energy that will help her drive the ball.

Hope Brandner has her hands drop down, which is okay. We mentioned earlier how this is okay because of her body control, she knows exactly where her hands are during the swing and what you’ll see is she moves her hands back up to a good spot when she gets to launch position. Brandner’s front shoulder is working down and in, which will help set the stage for generating separation. She maintains good posture which is key. 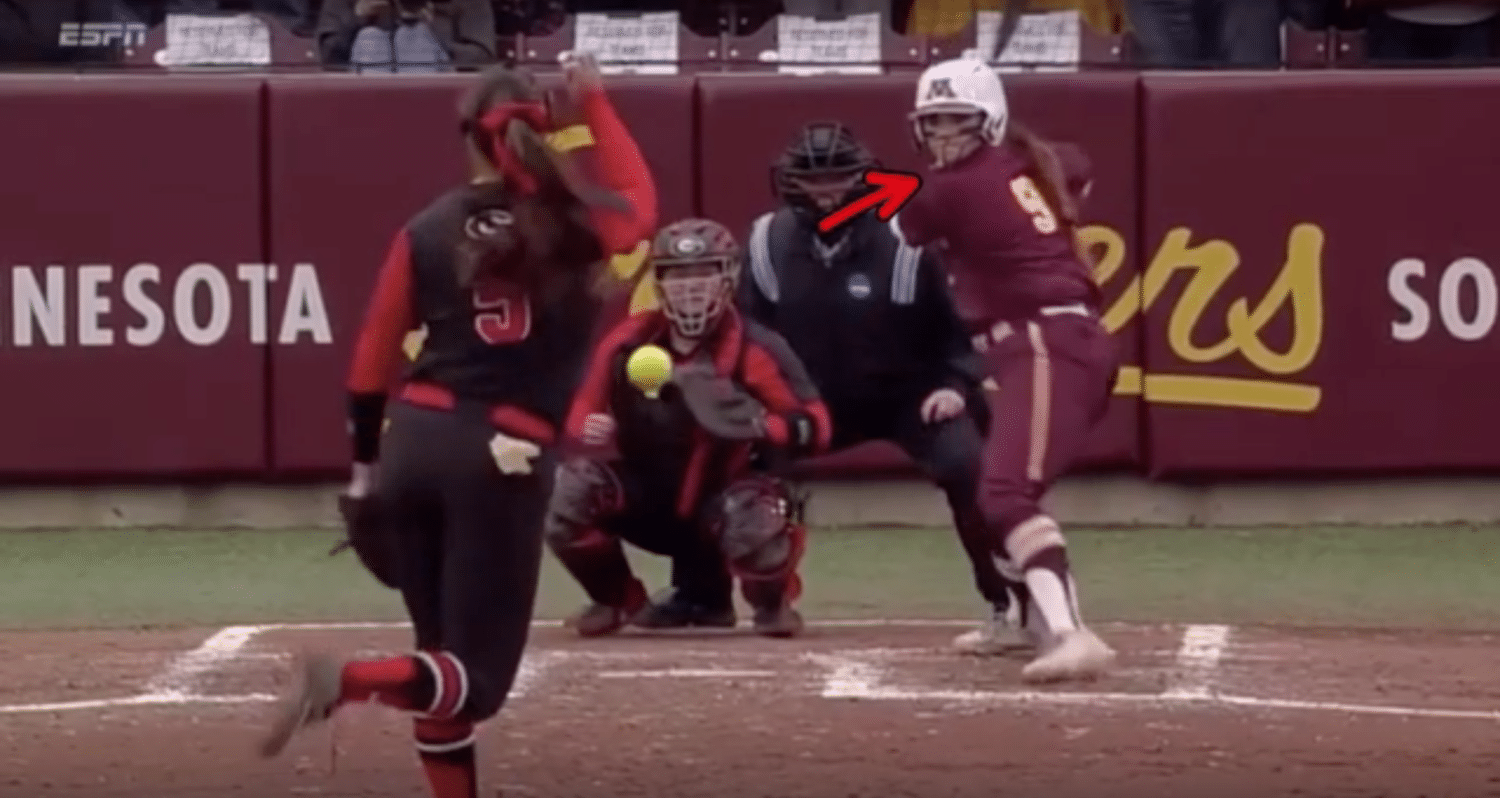 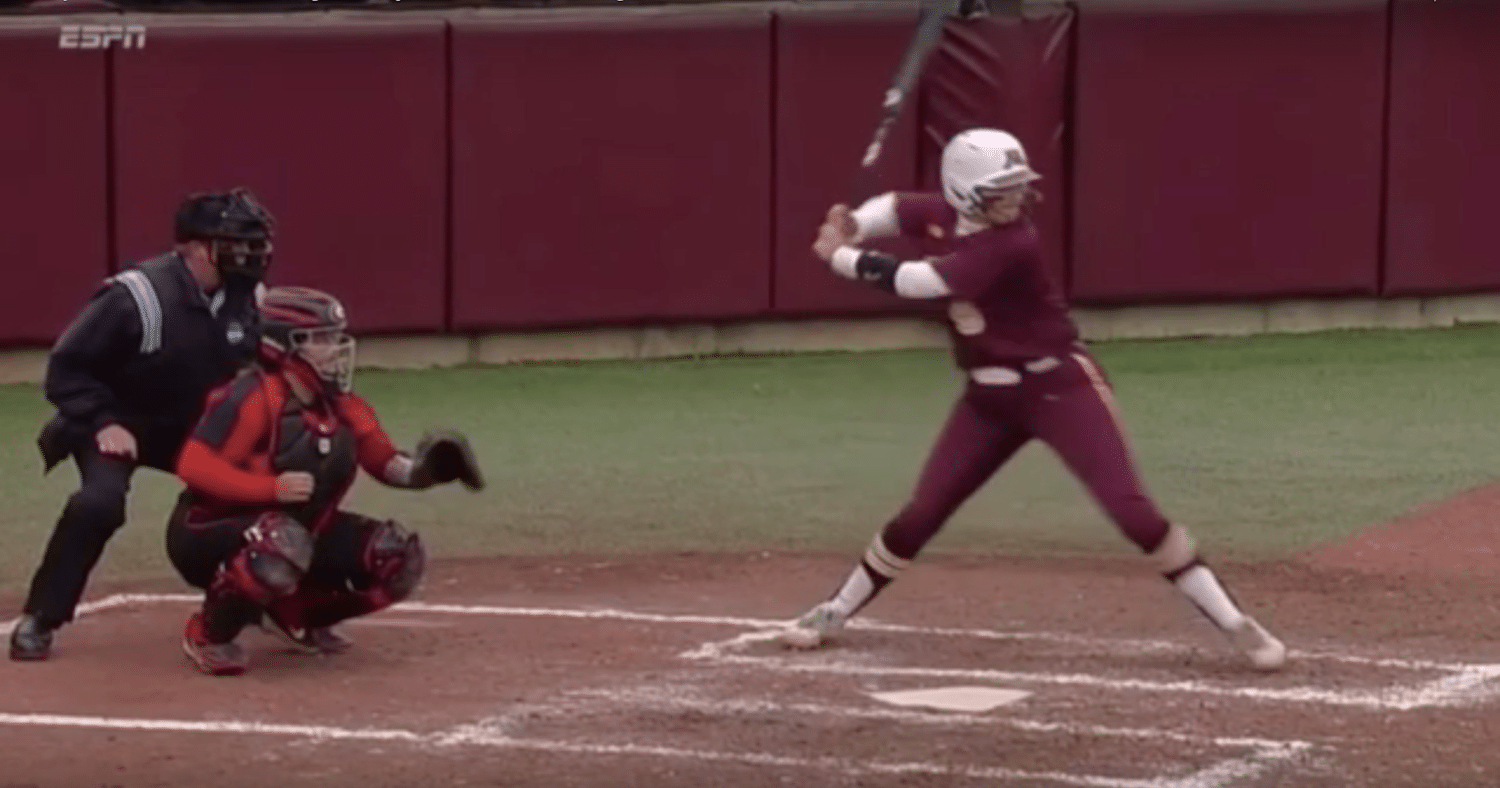 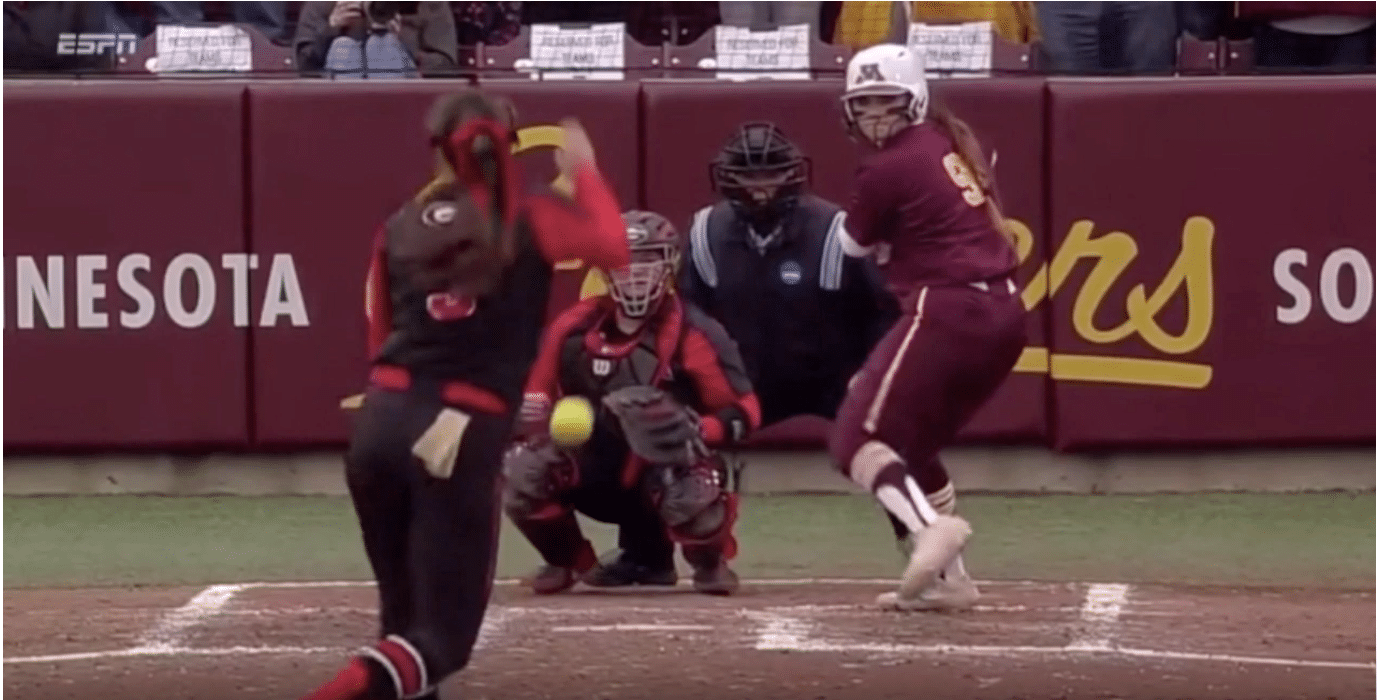 As she strides, her head gets squared over the middle of her body. While her hands are working up and back. She dropped them down in her load, but they are returning to the proper spot at launch position. The image on the left shows the direction her hands are going while her hips are started to uncoil. Her stride is about half her height and she is approaching launch position. 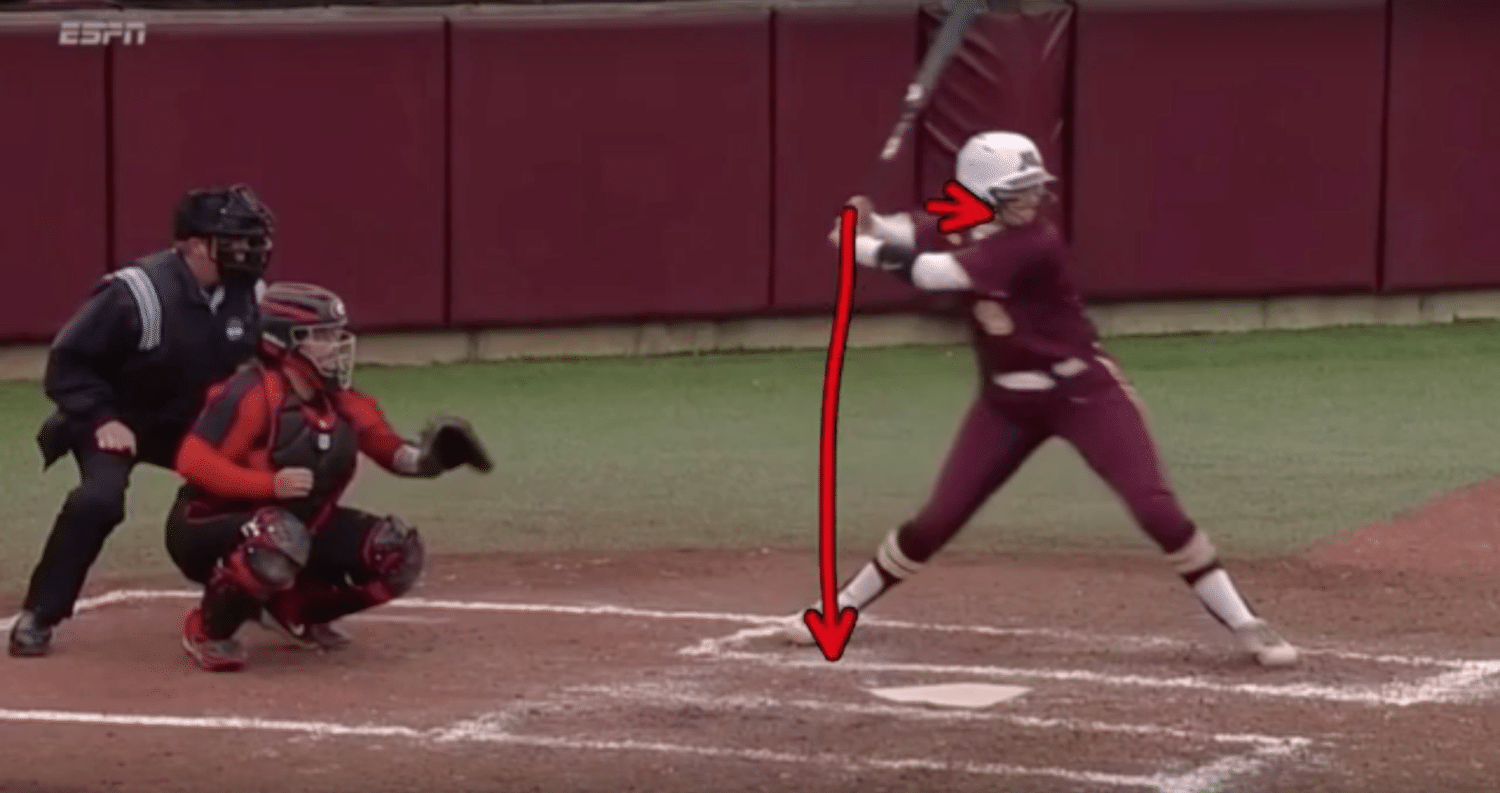 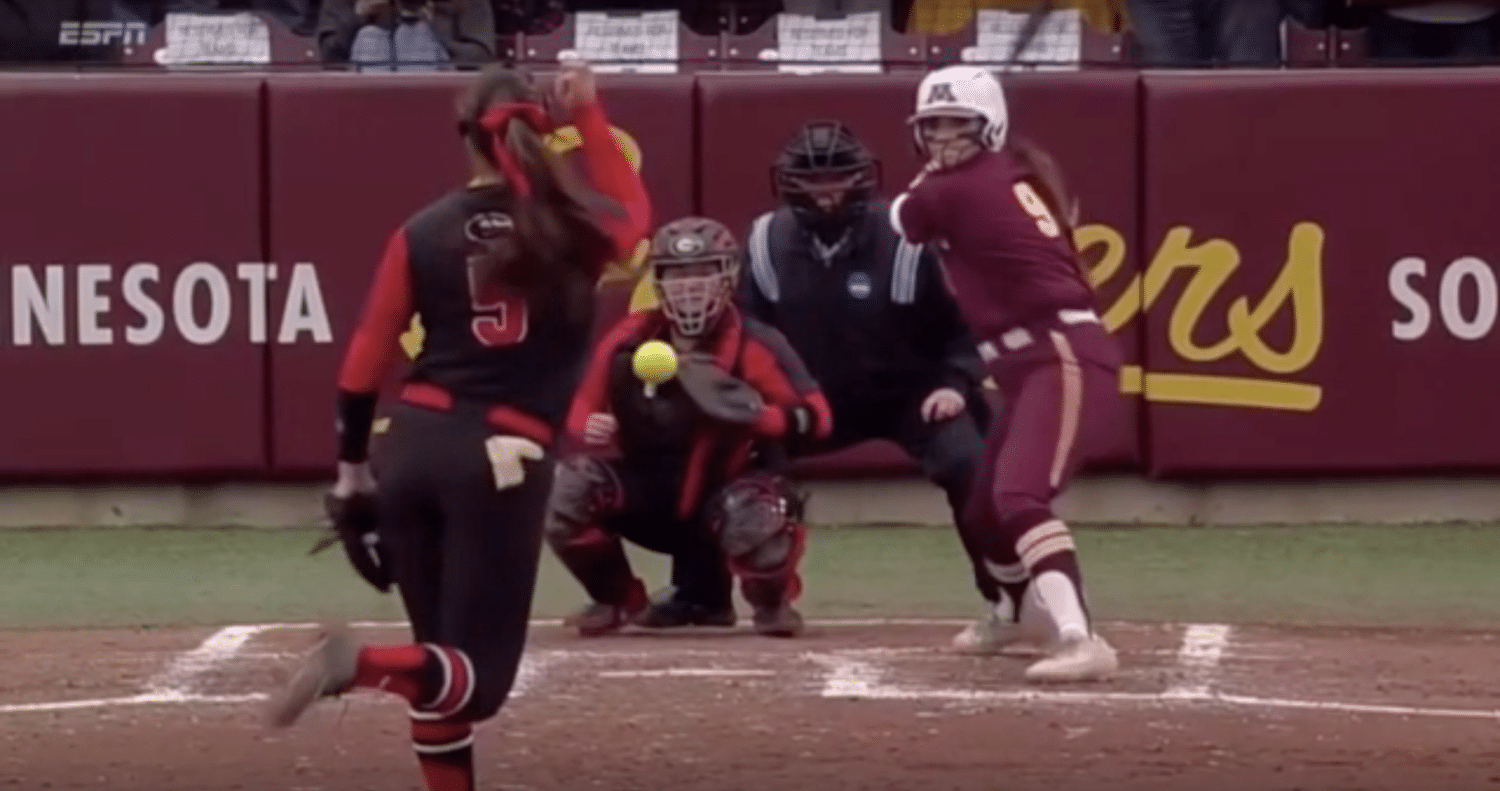 The former Oregon State Beaver gets into an incredible launch position here. Her front heel is on the ground, and her head is central over her body. Also, notice the separation she gets between her hips, shoulders, and hands.

Hope also has her hands back over her back foot and her hips are already unleashing towards the ball. Her front knee has bend in it, she has torso tilt, her eyes are over her toes, and her shoulder is still slightly down and in. 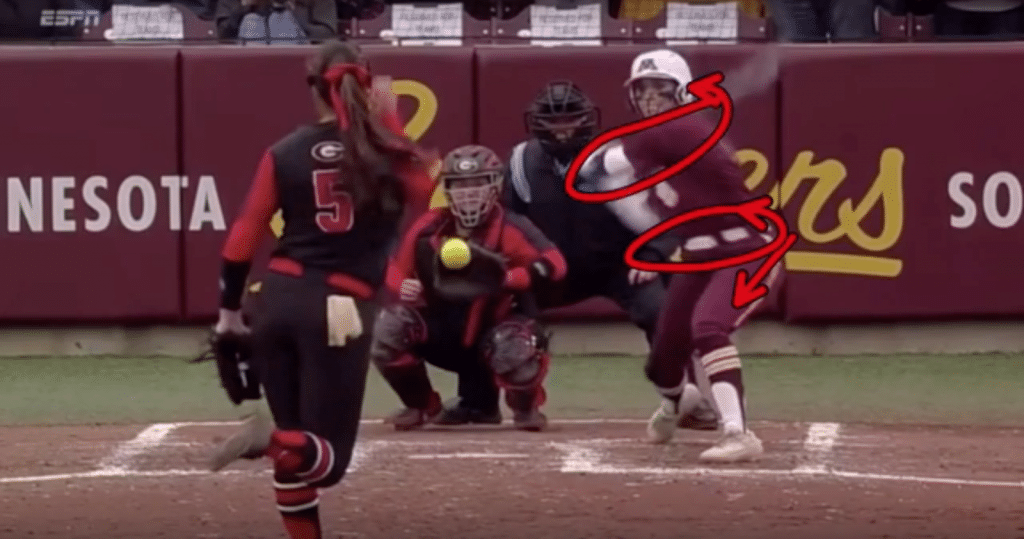 Hope Brandner Getting on Plane and Front Leg Adjustability

This pitch was a changeup, and it fooled Brandner a little bit. With her front leg adjustability, she was able to keep her hands back a split second longer to square it up. In youth softball hitters sometimes we see them lock out this front leg as they land and that will give them no chance at adjusting to pitches. Brandner, by keeping the front knee bent, actually delays her hips and hands firing through the zone. 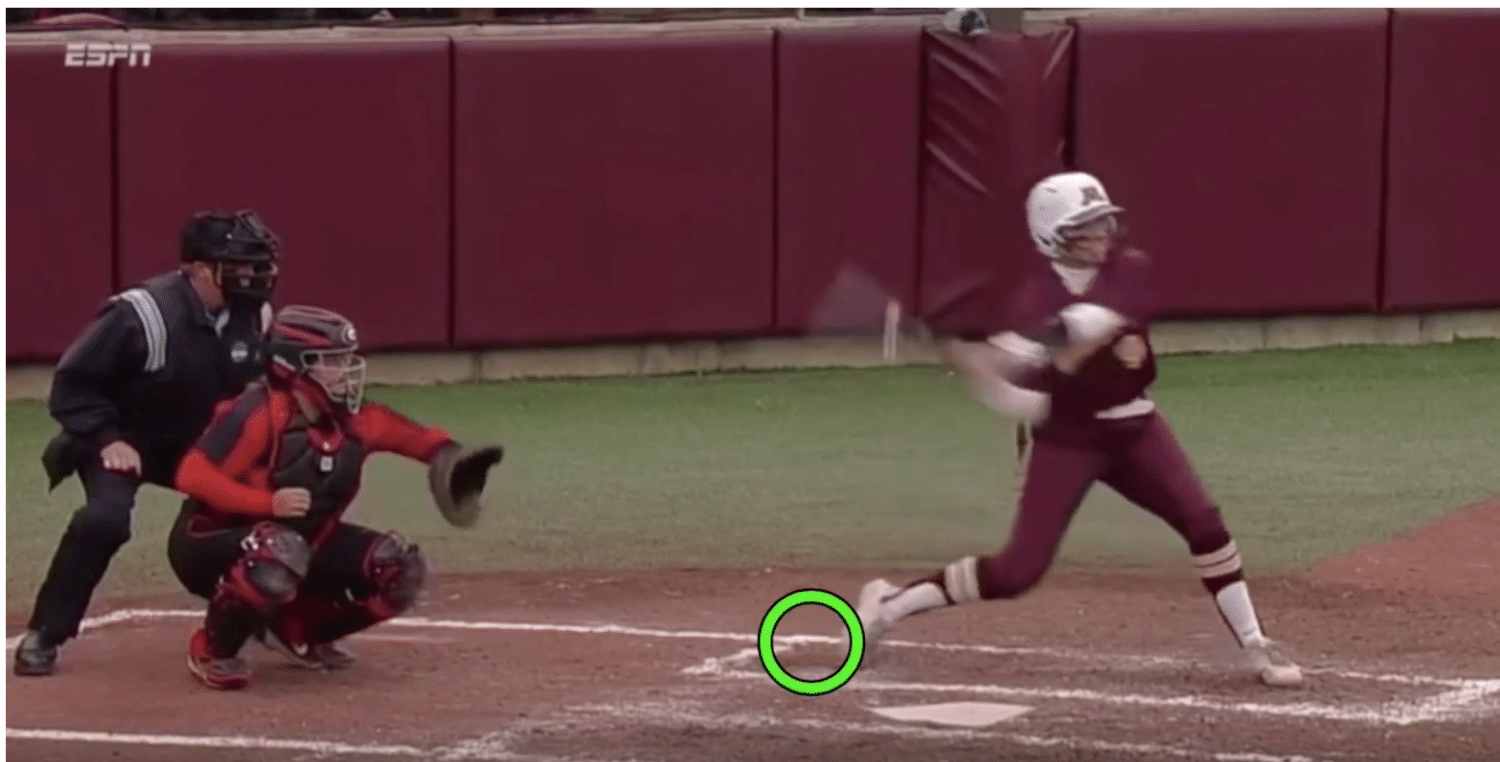 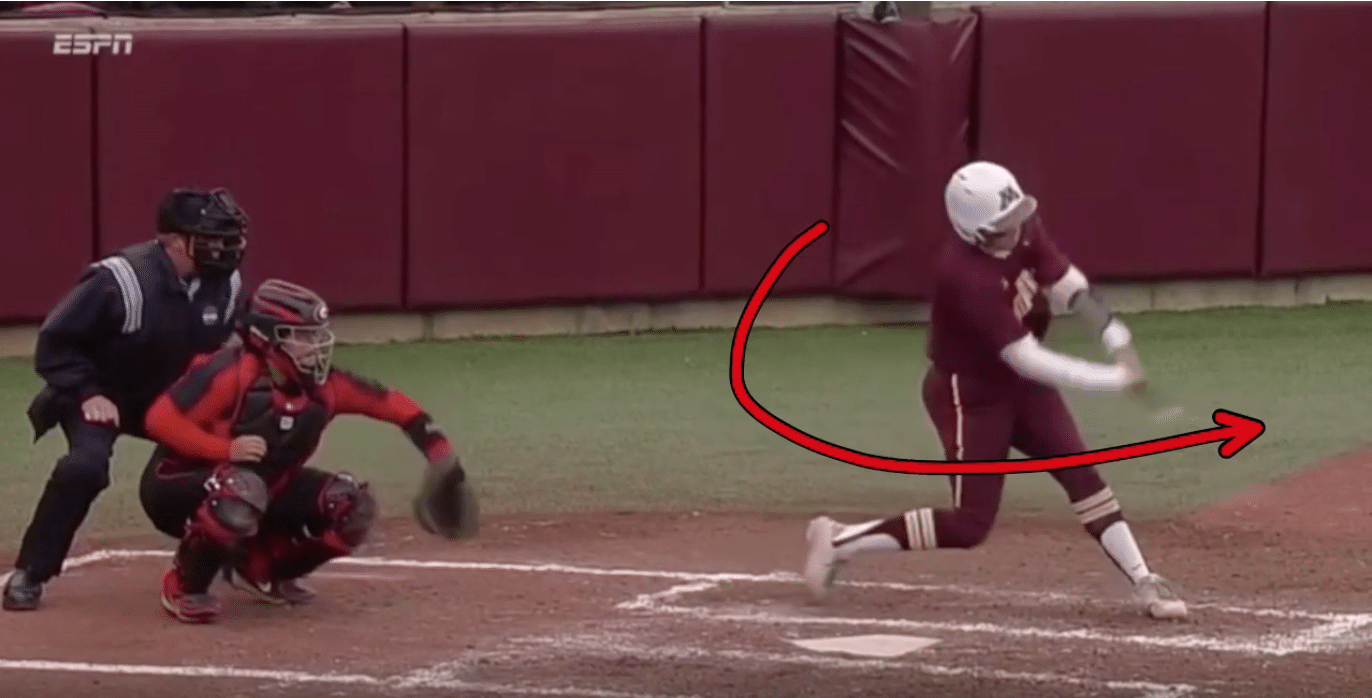 The swing itself is not the prettiest, but the ability to sit back and stay on plane with an offspeed pitch takes her from a good hitter to an elite hitter. You can see it here in the side view as well. Her front leg is bent, delaying her hips and her shoulders from releasing through the zone. The circle represents where her back foot was in launch position. You can see that it has become weightless — debunking the myth of “squishing the bug.”

She gets on plane early too, giving her a chance to generate bat speed where the ball is. Getting on plane is so valuable to softball hitters. It is extremely hard to hit a softball without generating any force to meet it. Here is a look at her bat path on this home run swing.

In order to elevate your game to this level, you need to understand how the body moves and master those movements.