Ready to Give the Joy and Confidence That Comes from Hitting the Snot Out of the Ball? Yes! Show Me How
The Hitting Vault » Hitting Tips » Fitness » Softball Workouts – Six Exercises for More Power at the Plate

Softball Workouts – Six Exercises for More Power at the Plate

Does it feel like your power has plateaued, even though you’re going through hitting drill after hitting drill and putting in hours of tireless work on the tee? Has the effortless pop you had on opening day gradually tapered off over the course of the season? Perhaps it’s time to re-think your workout program and make sure you’re doing the right kind of strength training to boost your power and get better results at the plate.

Hitting is arguably the most skill-intensive movement in all of sports. As an elite baseball or softball player, you already know all about the endless hours spent honing in on the tiniest of details.

Developing power and consistency at the plate starts with the swing, and top-tier hitters understand the importance of continually evaluating and fine-tuning their mechanics. What fewer hitters realize is that it’s just as important to focus on the details of your training regimen.

The work you do in the gym should be directly linked to your on-field field goals. But when it comes to softball workouts, traditional weight training doesn’t always translate to added power at the plate.

This article explains why, runs down three important considerations to keep in mind when you’re in the gym, and highlights six exercises that can have a game-changing impact on your hitting.

Consideration #1: Focus on Strength Before Power

Strength is the foundation of any well-rounded athlete. It’s what helps our bodies withstand the wear and tear endured over a season and a career. As a softball player, midline stability and hip control are two components of strength that should be addressed first when creating a workout protocol.

The term “midline stability” is another way to talk about core strength. Whereas some people think of core strength as having a six-pack, it actually implies that the athlete can rotate, flex, extend, and side bend safely and explosively during athletic movements (and, in particular, during the swing).

Hip stability allows a hitter to generate tremendous force without compensating and relying too much on the muscles of the back. Stability at the hip will also allow a hitter to harness the power generated during the swing and not have a weak hip lead to leaked power.

Therefore, the midline and the hips typically complement each other. Due to the fact that there are several muscles of the ‘core’ that also cross over the hip joint, there are a few exercises that can train and strengthen both midline stability and hip control.

Rotational hip strength leads to power in the swing (1). For any explosive rotational movement, the forces needed to create this motion are initiated by the hips and legs. Having hips that cannot withstand the forces generated by the legs will throw off your sequencing and limit the power you can produce.

The muscles that are strengthened during this exercise are paramount to hitting for power — and more specifically, for creating a blocking force on the front side (e.g., a stiff front leg).

For this exercise, start on your back with your hips elevated and one leg extended straight. While pressing your arms into the ground to maintain stability, move your extended leg out to the side as far as possible without your hips losing balance or control. Then return to your starting positing, regain control, and prepare for your next repetition.

The rotational demands placed on the midline of the body (any muscle that attaches to the spine) during the coiling and uncoiling of the swing can begin to wear the body down over the course of the season. This exercise is a great strengthening tool for the lateral stabilizers of the back and core.

Start in a side plank position with your elbows and shoulders directly in line with each other. Next, reach underneath your rib cage (toward the wall behind you) and return to your starting position.

Consideration #2: Can You Absorb Power?

The body will not produce what it can’t absorb. Think about it like this: if your body doesn’t trust you to land, it won’t allow you to jump as high. If your body doesn’t think you can safely decelerate a tremendously aggressive swing, it will brace itself and stop you from producing an explosive sequence of movements.

Focusing only on producing power is like adding a souped-up engine to a car without checking the breaks. This is typically why we find leaks in power due to tightness or injury — the body is protecting itself by limiting explosiveness.

For the kneeling banded anti-rotation pulldown, you’ll need a band with 10-20 pounds of resistance attached to an elevated structure. Note that positional awareness of the exercise is more important than the resistance of the band; even having someone stand and hold a lightly-weighted band overhead will be plenty of resistance to achieve the benefits of this movement.

Begin the exercise on your knee with your torso rotated as far as possible without arching the back. A good way to know you’ve arched your back too far is if you begin to feel a big stretch in the front of your abdomen, hip and leg. Hopefully, you can see the similarities between this exercise and the movements of a hitter.

Next, without changing torso height, pull the band down to your opposite knee. Repetitions of this exercise should be done at a slow speed in order to ensure the midline is capable of proper absorption of forces in the vulnerable positions of the swing.

If you’re interested in learning more about how to integrate resistance bands into your workout, warmup and recovery routines, check out this post that highlights six of the best j-band, long loop and short loop band exercises.

Typically, when a hitter thinks of exercises that can be used to help generate power at the plate, some form of a medicine ball (MB) throw that simulates the hitting motion comes to mind. (Don’t worry, that will be covered next.)

I can’t emphasize enough how crucial it is to work on improving your absorption capacity before you work on generating more power. The inability to absorb power will cap your power potential and limit your overall growth as a hitter (or eventually lead to injury).

This exercise begins in a split stance, with the leg and foot closest to the incoming medicine ball set back and the other leg set forward. This creates a wide base of stability and support. Once you’re fully balanced, have a coach or teammate throw an MB toward you so that you catch it with your arms extended. The goal is to intentionally decelerate the weight as you rotate.

You can see this exercise in action in this YouTube video.

Consideration #3: Be Intentional About Power When Using a Medicine Ball

The final consideration when it comes to developing power at the plate is to be intentional about that power.

I could write an entire article filled with examples of medicine ball drills, but those drills will not translate into increased power unless performed with deliberate intent. That means you should focus on being just as aggressive with these exercises as when you’re hitting a ball.

First, make sure you have a target for your throw. Just as with hitting, impressive exit velocity doesn’t matter if the launch angle is off. That’s why it’s imperative to utilize the same critical movement patterns that you use when you swing — the more you’re able to do so, the more these drills will impact and improve your on-field performance.

Typically, a target at approximately eye level is beneficial for trajectory angle.

Second, use a radar gun or pocket radar to measure the velocity of your medicine ball throws. These measurements can be helpful not only for evaluating your progress over time, but also for prescribing the right number of repetitions and sets.

Typically, the best medicine ball weight for softball players during these drills is 4-10 pounds, depending on age and strength. Our college-aged male baseball players stay within a range of 8-14 pounds. If your exit velocity drops below approximately 90% of your max miles per hour, that’s an appropriate time to rest.

To take and record these measurements, you’ll need the help of a coach, teammate or parent. Also, double-check your radar device, as some are inaccurate when measuring slow-moving objects.

Begin with the medicine ball by your shoulder, similar to (but probably slightly lower) than where you would hold your bat. Next, emulate the phases of the swing and aggressively rotate from the back hip to fire the medicine ball into the wall.

Hop Back to MB Throw

Start by hopping back into your back leg and foot. Then, rapidly explode forward, simultaneously driving your back hip and shoulder. As shown in the first image (on the left), you should have your weight centered and not be falling or leaning one way or the other.

Improving your power through workouts doesn’t have to be complicated. Following these guidelines can help accelerate your power progression at every stage of your development as a hitter:

Weight training is an important part of your overall fitness and conditioning, but it’s important to utilize exercises that are designed to strengthen your body in the right way. Your goal as a competitive athlete is not simply to get stronger in general, but to improve your performance in the specific skills necessary to excel at the sport you play.

Cassie Reilly-Boccia is the Director of Research and Development and Intern Curriculum at Athletes Warehouse in Pleasantville, New York. She is a graduate of the University of Alabama (BS). In 2012, she and her team won the Women’s College World Series. 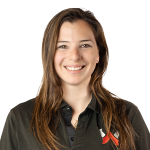