Boston Red Sox Outfielder Mookie Betts won the American League Most Valuable Player award in 2018 due to his stellar defense and his ability to hit not only for average but also power. He led the regular season with a .346 batting average, had 32 home runs, and 47 doubles. Having both tools power and average, as well as being ranked 2nd in On-Base percentage at .438 made him virtually unstoppable. What is important to note is while the average MLB player is 6 feet tall, 207 lbs, Betts is only 5 foot 9and 185 pounds. He hits for both power and average not because of his size, but his ability to create tension and then move his body in the correct sequence.

At The Hitting Vault, our members have the ability to submit a video to us for swing analysis. Our hitting coach Alexa Peterson breaks down swings and provides specific drills for our members to unlock their power.

Recently, we’ve started doing swing analysis’ on professional hitters and coaches have found them very valuable in sharing with their players. Check out the video breakdown below for our swing analysis of Mookie!

Looking at Mookie Betts’ stance, he is pretty upright and tall. Every stance is unique, it’s about comfort. For younger kids, it’s easiest to not have a drastic starting stance like some of the all-time favorites below, but having a more neutral stance like Betts. Mookie feels more comfortable in this position before the pitch is thrown, but as the opposing pitcher, Gerrit Cole begins his windup. Check out this blog post for the top 5 mistakes hitters make in their stance.

As Betts begins his load, his bat moves from horizontal to more vertical, his front shoulder begins to work down and in, and his back shoulder works up. This is creating coil-like tension in the load of his swing which will ultimately open up an immense amount of power. Betts loads into his back hip without shifting all his weight outside his back foot. He is essentially gathering his body in preparation to move forward into his strides. He begins to move forward and gets into his stride as Cole releases the ball. As he strides forward he maintains tension in his swing by keeping his hands up and back as the rest of his body moves forward into his launch position. If you can maintain posture at to launch position, that will be the key.

Launch position is when the front heel hits. The picture below depicts Mookie Betts in his launch position. His numbers showing are a good indicator, he has his lower half beginning to unlock and release to the ball, while his upper half is still held back towards the plate and the catcher. This is the ideal separation between his hips and his shoulders. Be careful that you are not teaching young athletes to over rotate and force numbers to show, this will create bad habits of bat wrapping.

Couple things to note that are important in a good launch position: 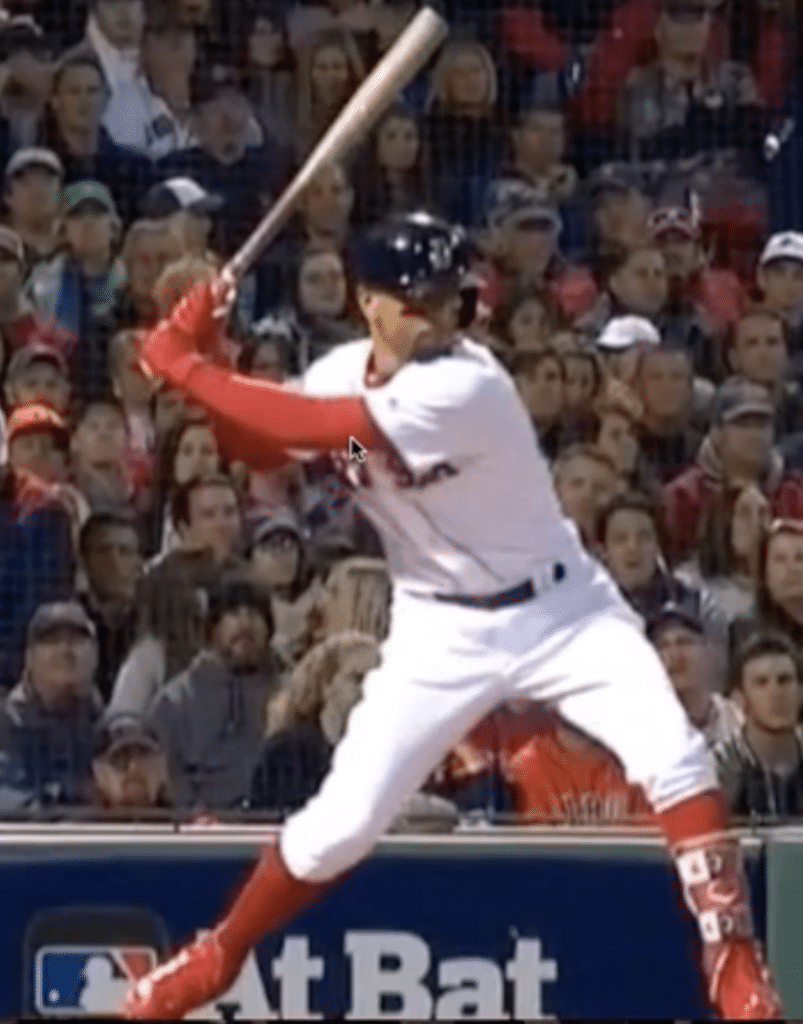 In the same picture above it is important to note that Betts’ hips are starting to unlock. Every athlete will be different with hip mobility and flexibility, but it just goes to show how important to the swing the hips are. Betts is keeping his front shoulder down and in at about a 45-degree angle, and his hips are starting to unload. Trying to get young hitters to open their hips will help develop power as long as the upper body has not started to unwind yet.

Betts recognizes the 3-1 outside fastball and decides to pull the trigger. In going after an outside fastball, he creates a lot of tilt in his torso, while keeping his bat and wrists strong. What we mean by that is that he is not staying upright and dropping his barrel or wrists to reach for the pitch. He’s taking the same swing that he would on a middle fastball, but adjusting it for an outside pitch. His barrel continues to work behind him from more vertical to more horizontal, as he tries to drive the outside fastball. He gets his barrel to a strong contact position, palm up – palm down. 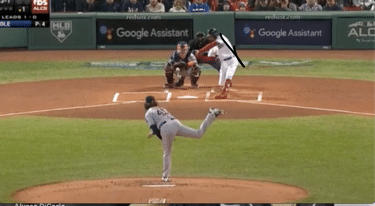 Having strong wrists at the point of contact is essential to putting the ball in play hard. Betts’ belt buckle is facing the pitcher before the point of contact, further emphasizing the need to unlock the hips before hitting the ball. He is able to have his hips move without “pulling his head” or “flying out” because he maintains his hip hinge through his swing.

Pulling your head typically is because the hitters lose their tilt. This results in a bat path that is in and out of the zone quickly rather than on plane for a long period of time. Betts tattooed this ball off the wall in center field for a double.

In order to fully understand this swing, we need to see it from multiple angles. The Mookie Betts swing from the side is just as pretty as it is from the front. The photos below are during his load and stride. As he moves forward, he keeps his hands back almost as if he’s stepping away from his hands, creating that separation between his hips and barrel. His front shoulder is working down and in while his hips begin to open just a little to create that good torque. He keeps that posture in his launch position. 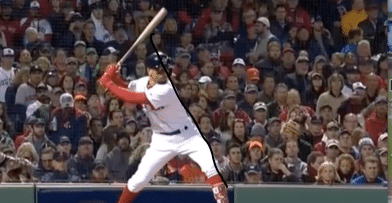 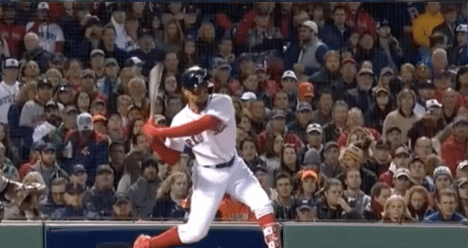 Betts’ shoulders have switched, his back shoulder is now lower than his front shoulder creating upward trajectory. He also has his barrel working behind him as his belt buckle is practically facing Gerrit Cole and he is attacking fastball.

Mookie Betts has great bat lag, but note how he keeps his hands and elbows tucked in towards his body. Often times we will see hitters throw their hands out towards the other batter’s box in this position, but he is creating great separation. His back foot is also becoming weightless at the point of contact, indicating a weight shift from his backside, adding momentum to and through the ball. Betts remains on plane to and through the point of contact, showing incredible barrel control. At the point of contact, he looks like he was fooled just a little bit, as the pitch was a little further out than he expected. He is locked out with his front arm, causing him to reach a little bit, but he still squared it up and hit a missile. 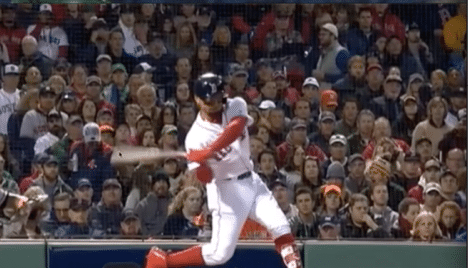 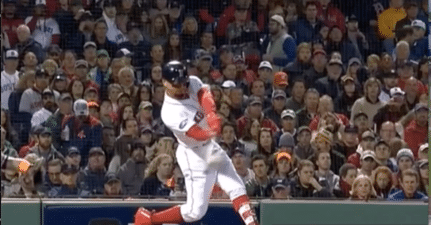 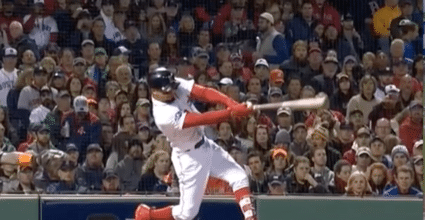 Finally, Betts’ extension is fantastic here. The extension is a bi-product of how your barrel works through the zone, he is not trying to push his barrel towards the pitcher with his hands, this is a result of the lag he created earlier in his swing.

Mookie Betts has a picture-esque swing for hitters to look at. He is not a big strong guy like Giancarlo Stanton, but he still produces. Betts has all the tools in the set, and perhaps his two most prominent are his ability to hit for average and hit for power. The guy makes the most of what he has with his physical stature and maximizes his ability to hit in his swing. Betts has the unique ability to unlock his power and hit to all fields through creating good separation, using his lower half, and driving the baseball to all fields.